Released in 2006, the novel, with its 42 year old colored protagonist, became invariably present in the Presidential elections in 2008 with its precise predictions about campaign development and outcome.

Long before the campaign for the presidential election in 2008 took off and before the candidates declared their participation in the race to win the White House  the author predicted that the president elect would be a coloured person born by Afro-American / white parents. 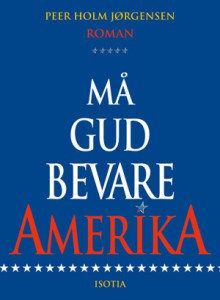 The novel takes off a year before a presidential election presenting the well-known scenery of a small group of wealthy white men and a single white woman as the protagonists in the competition to win the White House. As usual a number of other candidates, tried as well as untried waits in the wings

The question is whether one of the candidates will be able to bring the U.S. back into the good company or ?

For the time being published in Danish only, as no literary agents or publishers abroad believed in the prediction would come through.

The story: USA with a new face

U.S. is heading towards its next presidential elections. With a Republican president who wants re-election and a democratic challenger the stage is set to the usual competition between wealthy white men to win the White House

until an old negro opposes the plans of a construction group to be build a science city at an area where a small multi-male society has existed on their own terms for more than 75 years.

It sends a 42 year old mulatto woman on the track and the race for the White House turns into a surprising development. In a combination of historical facts and current events  added a lot of fiction  the reader is brought deep into the mechanisms that makes the U.S. government and citizens to act as they do.

Truths, which differs from the commonly assumed, folds out into full daylight.

The germ: The lady in New York Subway

The author left Denmark in 1962 as 16 year old on long voyage to experience the world.
A late New York evening in the autumn of 1963, he sat as a 17 year old in the subway on his way from Times Square to Brooklyn.
At Canal Street Station, an elderly, obviously very tired black woman entered the train carrying two heavy bags.

The author rose to give her his seat. The black woman was standing with a mixture of gratitude and fear painted face.

The white, completely as the black passengers eyes said: You do not!… for both of them.

This is the germ of this novel.

The background: Gods own country?

The opening of the U.S. Declaration of Independence written by Thomas Jefferson states:  that all men are created equal, that they are endowed by their Creator with certain inalienable rights, that among these are life, liberty and the pursuit of happiness. It was on the 4th of July 1776.

225 years later the project had not yet succeed. In 2001 the U.S. lost their seat on the UN Human Rights!

Since that the U.S. declared war on terrorism for the Third World War and has set the nations military brawn against the all the worlds evil  anywhere. Anytime. Yet the invisible enemy is still somewhere out there.

Meanwhile growing poverty in the U.S. explodes: Every day 25 million citizens rely on food from charities.

More and more people ask themselves: Is this really Gods own country?

“I am not criticizing the Amercians. I am just telling who they are,” says Peer Holm Jørgensen.